While other sports were forced to pause seasons or delay opening day, the NFL had the unique advantage of having months to come up with precautionary measures to protect their own season. Instead of announcing measures for regular season play targeting elements like sideline distancing or masks, or even a league wide policy on fans, they merely elected to cancel everything leading up to kickoff. The Hall of Fame game and then the preseason were both scratched, which does little to address the core problem: how do you prevent an outbreak in a league of nearly 1700 players?

They did implement, like all other major sports, an opt out clause for players who wished to forego this season. Naturally they knew players would use it, but few could have predicted just how many would elect to sit out whatever version of a season 2020 will bring. 66 NFL players informed their teams that they would not play this year.

Nearly half of the 66 are linemen, which is unsurprising when you consider how close they get to other guys. Leo Koloamatangi, center for the New York Jets, explained that he’s “literally bear hugging another creature on the other side of the ball every single play. If that guy has any symptoms I’m going to get them.”

The full breakdown of position groups and their opt outs is as follows: 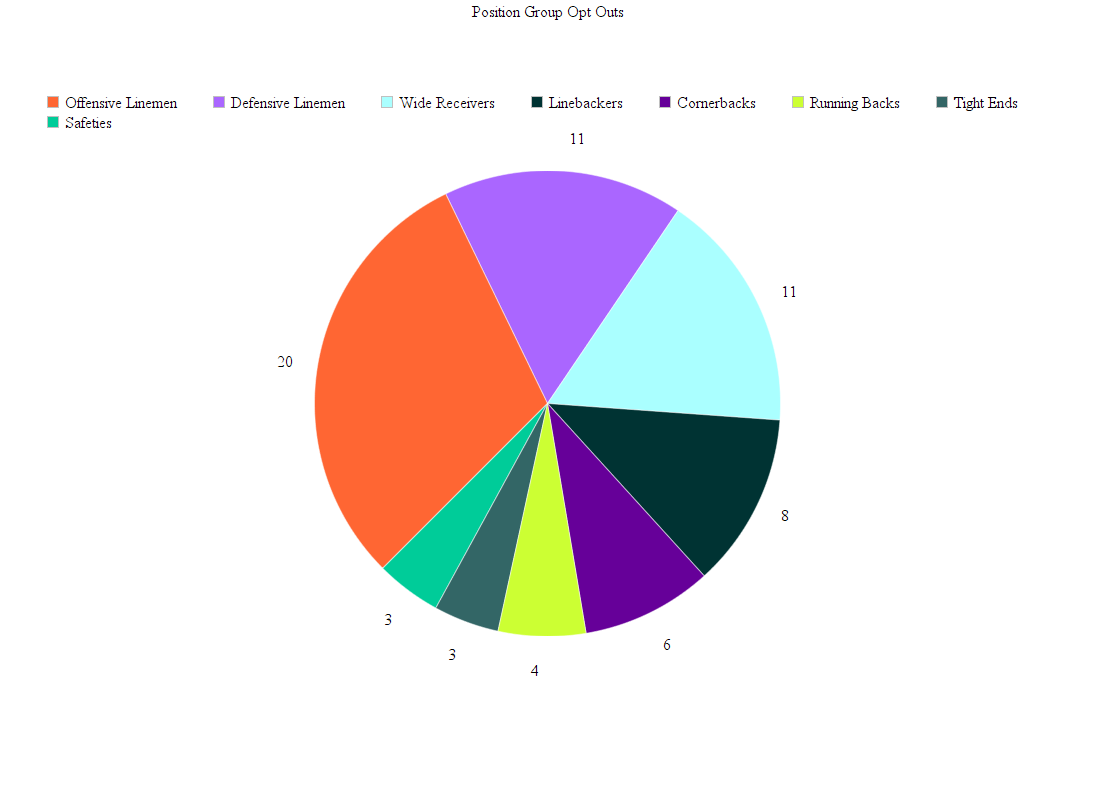 The New England Patriots were hit the hardest with 8 guys choosing to sit out, while the Pittsburgh Steelers, the LA Chargers, and the Atlanta Falcons were the only teams to not have a player choose to forego this season.

Players were given two avenues to opt out: medical or voluntary. A medical opt out comes with a $350k stipend for the season, whereas the voluntary opt outs pay a $150k advance on next year’s salary. In order for an opt out to be considered medical, it has to come with proof of diagnosis of one of the 15 conditions the league has identified as “high risk”. This includes ailments such as cancer, chronic kidney disease, type 2 diabetes, or asthma to name a few. There were eight confirmed medical opt outs, with 36 unspecified ones.

When it comes to voluntary opt outs, the reasons may vary but what appears to be the constant is having to do with family. Either new dads, expecting dads, or guys who have high-risk people within their family have decided not to risk anything by staying off the field and out of the locker room. The decision to put family over football was referenced a lot across the multiple social media statements that have been released.

Players like Marquise Goodwin, who has a five-month old daughter, as well as immediate family who are at an elevated risk for COVID-19, and explained that he wouldn’t feel right if he risked putting others in harm’s way for the game. Patriots studs Dont’a Hightower and Patrick Chung also both cited their growing families as the driving force behind their decision to stay home.

Then there’s Laurent Duvernay-Tardif, who, you know, casually decided to remain on the front lines as a doctor as opposed to returning to the football trenches…

What Does it Mean?

Though the effects will vary from team to team, depending on whose not there, the overall effect is that the salary cap situation becomes a little more delicate, especially when looking ahead to next season.

Everything from contract payments to bonuses for opted out players now move to next season, minus the $150k they’re being paid this year. This means that for the 2020 season, those contracts are off the books, thus liberating cap space. Teams who lost a single, lower-tier player may not feel as much of an impact. But clubs like the Patriots, who have had multiple big-name guys opt out, could reap the benefits of those delayed payments. Case in point: the Patriots were incredibly tight this season in terms of their cap hit, but they suddenly have over $33 million to work with.

The high number of opt outs could also hint at the need for some more action on the NFL’s part. With 66 guys sitting out, it demonstrates an extreme lack of confidence in the league’s ability to manage the situation. The NFL ranks second to the MLB in terms of percentage of players who have sat out. And like the MLB, the NFL is the only pro league to not suggest a bubble format, or a ban on fans.

While the NFL says it will kick off the season on schedule, September 10, what it will actually look like remains to be finalized. What is guaranteed is that we are in for a season like no other, one that could see some unlikely winners.